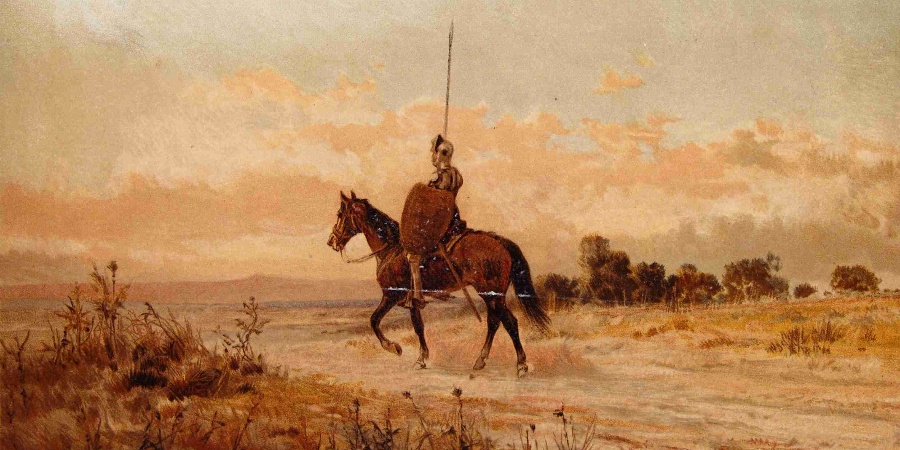 I am not a book snob.  I’m not even a real big reader, especially of the Classics, which I find way too deep and hard to understand.  I’m OK with light fiction, but Shakespeare is just too hard to get through.  Now, that said, I deeply love Miguel de Certantes’ classic, “The Man of La Mancha”.  Why?  Well, you know Don Quijote is nuts, right?  His story is also a metaphor for real estate appraisers.

He’s nuts because, in part, he wants to become a knight.  One just does not become a knight, especially in 17th century Spain.  A knight is a gentleman, and one is born a gentleman.  It is not a position to which one ascends.  It is a position into which one settles.  And to settle there, one must be a noble gentleman, not a man from La Mancha (the literal translation of which means a stain, a splotch, or a dropping).  He is not a “Don”, a word that has no translation in English, but can mean nobleman or honorable man.  He was a commoner. Yet, through nothing more than the power of his own aspirations, he deemed himself a knight.

To be a knight required a noble steed, usually numbers of them, and they had to be stallions, to boot.  These were young, strong, virile animals to carry the knight and his heavy armor into battle.  Don Quijote had a sway-back old nag, a gelding, yet gave him the name Rocinante, a regal name with deep meaning in Castilian Spanish. I mentioned Don Qijote was nuts, right?  Nuts enough to have a vision, a goal, and then work toward achieving it.

And how about armor?  Only the richest of the nobility could afford armor since it was handmade by but a few artisans in all of Europe.  So Don Quijote grabbed an old, rusted-out pot-belly stove as his armor and a barber’s shaving bowl as a helmet and deemed himself as well armored as any knight in the Court of King Phillip.  Yes, he was nuts.  Nuts enough to make due with what he had, while not worrying about what he did not have.

A knight had to have a squire.  A squire was usually a young man the knight took under his wing.  In return for the squire’s service (and perhaps death) the knight promised his parents to care for and educate him (a nobleman’s duty to help the poor).  Don Quijote had Sancho Panza.  “Sancho” is a commoner’s nickname, not regal at all.  And “Panza” means beer-belly, so Sancho was not a young man.  Yet Don Quijote, nuts as he was, deemed Sancho a squire.  And guess who lived up to that calling?

And a knight had to have a lady.  So Don Quijote chose Aldonza, whose name implies a quest easily conquered.  Yet Don Quijote christened her “Dulcinea”, a name implying sweet innocence.  I mentioned Quijote was nuts, right?  Nuts enough to see past what she was to what she could be.

Then, a man could not be a knight without a proper ceremony.  So Don Quijote and his posse stopped at the nearest roadside inn (a mean place a noble would attend only under the most dire of circumstances), borrowed a cheap sword, and demanded the inn-keeper christen him a knight.  Since some money changed hands, the inn-keeper obliged.  Don Quijote knelt before him and the inn-keeper said the magic words, “I dub thee, Sir, knight!”  And it was done.  Don Quijote, clearly a legend in his own mind, was, at last, a knight, with armor, a steed, a squire, and a lady.  And, yes, he was a little nuts.

And, you rightly ask, what does all of this silliness have to do with a hardworking, boots-on-the-ground appraiser?  Well, first of all, you might have to be a little nuts to be an appraiser. Then, we don’t get a lot of training to be an appraiser; a lot of it we have to get ourselves, on our own time, at our own expense.  While we do not risk life and limb as appraisers (knights were, after all, soldiers, prepared to die for the King), we put our reputations on the line every day with every report we send out the door. We undergo a lot of expenses preparing to be appraisers, all of which comes out of our pockets (in one way or another).  Yet, with all these risks we take, in times of plenty (such as 2018-2020) it is possible to make a lot of money to reward us for those risks.

We are in the position to offer people jobs:  jobs in administration, jobs as appraisers, jobs to VAs overseas who, otherwise, might not find work.  In other words, we are, via being appraisers, in the position to influence people, to help people, to serve people.  All of that may require us to be a little nuts.  But in being a little nuts, in serving other people as we do, we take on a nobility that we did not realize we had, but was always there.  All we had to do was reach out and grasp it.

5 Comments on “You Know Don Quijote is Nuts, Right?”